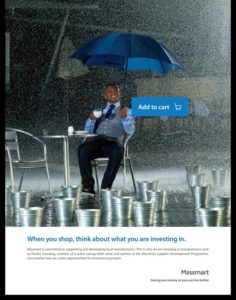 2014 GCIP-SA runner-up Paseka Lesolang (Leak Less Valve) selected by MassMart as a partner in their Supplier Development Programme. MassMart issued the following statement about the relationship in October 2017: “Massmart is committed to supporting and developing local manufacturers. This is why we are investing in Paseka Lesolang, Founder of the WHC Leak-Less Valve™. He is an innovator and partner in the Massmart Supplier Development Programme; just another way we create opportunities to prosper. 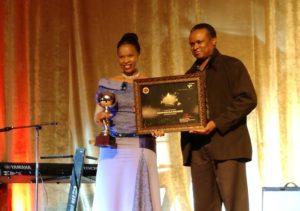 2017 Semi-Finalist Mpume Mncwabe (M and E Sustainable Solutions) was recognised at the 2017 COAM Excellence Awards hosted by Transnet Engineering. Mncwabe was awarded the Project of the Year, Inspirational Leadership and Breakthrough awards. 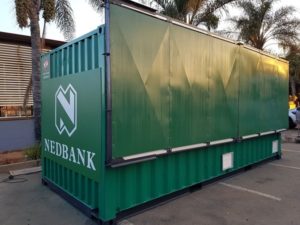 2015 Semi-Finalist James van der Walt (Solar Turtle) teamed up with Nedbank to bring banking to remote communities through 100% solar-powered “branches”. The first branch was launched in the Eastern Cape on 16 September 2017. 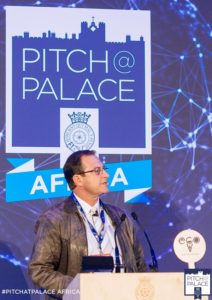 Van der Walt, jointly with Andre Nel (Green Tower) also had the opportunity to participate in Pitch@Palace Africa at Saint James’s Palace in London in March this year. As the only two South Africans amongst the 16 finalists in the prestigious Royal Academy of Engineering Africa Prize 2017.

In another achievement, Nel was selected as a finalist in the Swiss Social Innovation in Housing challenge for the GreenTower Microgrids, and exhibited at the Swiss Embassy pavilion at the SA Innovation Summit. 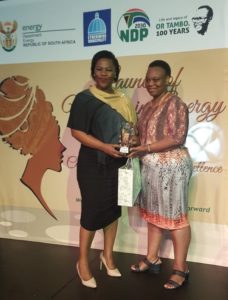 In addition, Qayi won the Young Woman in Energy award at the inaugural Women in Energy Awards hosted by the Department of Energy. Valerie Geen, GCIP-SA mentor and UNIDO Energy Department’s Senior Advisor and Implementation Specialist in South Africa, was also recognized at the event, receiving the Energy Efficiency Award. 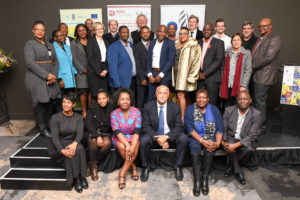 2015 GCIP-SA winner Dave Lello (FAABulous) was one of the South African winners of the 2017 SAG-SEED Award Winners, for the smokeless cooking stove. The SEED awards aim to recognise the most promising, innovative and locally led start-ups that are also eco-inclusive enterprises.  The winners were acknowledged at an event in August 2017 that also explored and deepened partnerships to promote eco-inclusive enterprises and to contribute to a low-carbon economy in South Africa.

2016 Runner up and winner of the Green Building Category at the Cleantech Global Forum, Martin Ackermann (Thevia Roof Tiles) participated in TEDxDonauinselSalon which took place in partnership with UNIDO in Vienna in November 2017.

2016 Finalist, Dr Corinne Greyling (Superhydrophobic HV coatings) participated in the Young Enterprise Initiative – South Africa which took place in Lyon, France, in November 2017. YEi-SA is a joint initiative between TIA and the French Embassy and aims to create market access to South African start-ups to grow and develop their businesses in France. 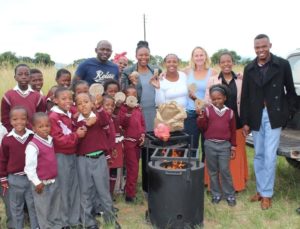 2016 Winner of the innovation for social impact award, Louise Williamson (Sustainability Professionals) progressed to the final round of the African Entrepreneurship Award. She will participate in the final round of judging in Casablanca, Morocco during December.

2017 Finalist Clement Mokoenene (Vehicle Energy Harvesting System) has been shortlisted for SA leg of the Chivas Venture competition. He will participate in the final round of the competition during January 2018. 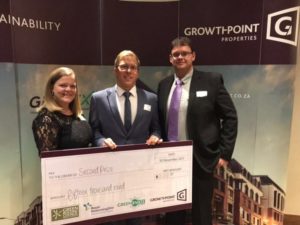 2017 Finalist team Leenta Grobler, Reino von Wielligh and Henry Marais (Smartpark) was awarded second place in the Greenovate Engineering Awards, an initiative of GrowthPoint Properties and the Green Building Council of South Africa. The intention of the awards is to expose industry to the pool of talent that exists within South African universities.