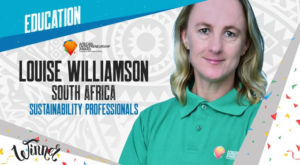 Louise Williamson, winner of the GCIP-SA Impact for Social Innovation Award in 2016, has been announced as one of 12 winners of the 2017 African Entrepreneurship Award! Louise was awarded US$100,000 as the winner of the Education category.

She joined 40 other entrepreneurs from 19 countries from the continent in Casablanca, Morocco, during the second week of December for the Presidential Round of the award. During their time in Morocco the finalists underwent individualised training and received mentorship by global experts before pitching their businesses to a ‘Presidential Jury’ of business leaders and entrepreneurs who have scaled businesses on five continents.

Louise progressed through the various stages of the competition for having an idea that is most needed in the region (Round 1),  most likely to succeed across Africa (Round 2), an idea that could potentially be the most significant and sustainable in Africa (Round 3) and an idea that will have the most plausible and probable impact (Presidential Round).